The great drama of sport 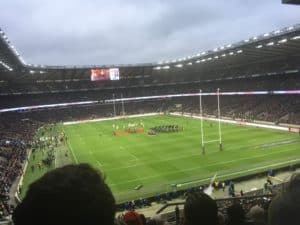 At the weekend I was lucky enough to be at the quite extraordinary Calcutta cup – a rugby match that saw England take the first half 31-7 and, in an unprecedented reversal of fortune, Scotland take the second half a perfectly symmetrical 31-7. It was one of the most bonkers experiences of my life and I genuinely felt like I was in a story that had been scripted by a child. A genius of a child, perhaps, but a child all the same.

No normal adult would believe it was possible for a team that had been so utterly dominant to collapse. A little hiccup perhaps, a try or two whilst caught off guard but not the wholesale rolling-over that came. I kept expecting England to take control and put the upstart Scots back in their place but they just never did. 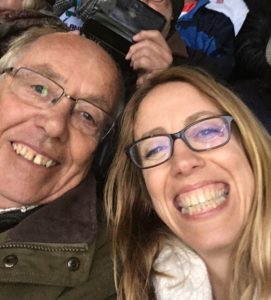 Bear in mind here, that I am one of those upstart Scots. Born in St Andrews to Scottish parents I am a proud Celt despite having lived in England most of my life. My husband is very much an Englishman, making the Calcutta cup quite a tense event in our household, but luckily I was at this particular one with my Scottish father, my husband safely many miles away back home. And oh my goodness – what a day to be a Scot!

The first half was, well… let’s be kind and go for ‘humiliating’ shall we?! As Dad and I sat there, three minutes into the match, with our heads in our hands as all around us the crowd leaped ecstatically to their feet we feared it was going to be a long night. At half time, despite a glimmer of hope in Scotland’s late try, my Dad predicted it could be a 70-point defeat. The very nice Englishman next to me suggested that it was ‘about time your lot got scoring’ as it was getting a bit dull and I confidently assured him that we were waiting for the second half so that the tries would made in front of our stand. How we both laughed, neither of us expecting for one moment that this would be true. And yet three minutes into the second half, there were Dad and I on our feet with the rest sat around us, head in hands. The madness was beginning and no one (save a genius child) could have written what happened next.

I sometimes wonder why there is such a divide between the ‘arty’ world of theatre and fiction, and the ‘laddish’ world of sport. After all, a live match can offer some of the greatest drama out there. It can also of course be horribly dull and some people evidently don’t like that lack of predictability. If you decide to go to a play you can read reviews, talk to people who’ve seen it already, and confidently book your tickets secure in the knowledge that the show you see will be more or less the one they did. There might be the odd fudge of lines but the basic dramatic arc will not change. If the hero dies at on Tuesday they will do the same on Wednesday. Not so sport. Two teams can play each other on back to back weekends with two totally different games and results. It is both frustrating and exhilarating but you cannot deny that it is drama. 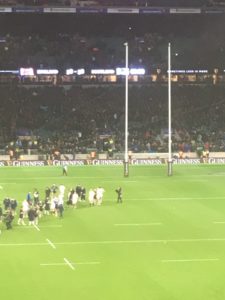 And so it was on Saturday night, right down to the England penalty with just two seconds left on the clock to set them up for the final try that brought the score to 38-38, the highest international draw ever recorded in rugby. For Dad and I it should have been despair – so close to winning just to be robbed in the dying moments – but it wasn’t. We had been on a roller-coaster ride with the lovely English fans either side of us, who had sportingly cheered our good fortune even whilst privately despairing at the collapse of their own. A draw felt right somehow and as we all spiralled our way down the enormous concrete ramp out of the magnificent stadium, both sets of fans were singing and everyone had the dazed look of people who still hadn’t quite processed what had just happened.

It was a crazy, insanely exhilarating eighty minutes of rugby that more than proved the old adage: truth came sometimes be so much stranger than fiction.