COMING THIS MAY - THE ZOOKEEPER'S DAUGHTER

A heartbreaking loss, a wartime secret, a shocking family mystery.

Berlin Zoo, 1943: As bombs darken Germany’s skies, ten-year-old Adelaide is tragically orphaned and zookeeper Katharina Heinroth takes the brave little girl under her protection. Devastated by the loss of her parents, Adelaide finds comfort in looking after her baby sister and the animals she adores. But when Katharina organises a dangerous operation to help children and animals escape the battle-scarred city, something goes wrong. And Adelaide has to make a promise to her adopted mother: a promise that will last a lifetime.

Germany, 2019: When Bethan Taylor sits on a bench in the middle of Berlin Zoo, she notices the elderly lady next to her seems confused, her thoughts flitting between past and present. Ada talks of her childhood, played out in an underground bunker beneath the animal enclosures during the war. As Ada’s story unfolds, Bethan is shocked to hear a name she recognises…

Katharina Heinroth is at the top of a list of German names Bethan found in a hidden compartment of her late mother’s jewellery box. Bethan’s father couldn’t tell her anything about the old piece of paper and she’s been searching for the meaning ever since. Could Ada help her uncover a long-buried family mystery? 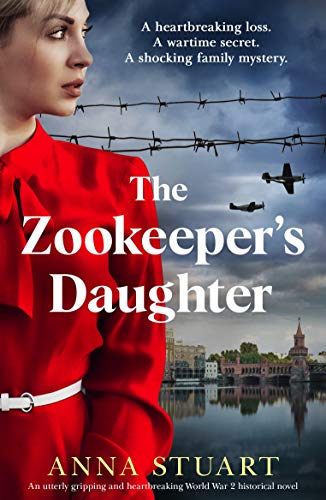 I wanted to be an author from the moment I could pick up a pen and was writing boarding-school novels behind the sofa by the age of nine. Sadly the need to get an education and earn some money intervened for a few years but finally in 2015 I published my first novel - a historical one under the pseudonym Joanna Courtney. I will continue to publish under that name but am delighted, as Anna Stuart, to now also be able to write contemporary fiction.

More about Anna
Scroll To Top