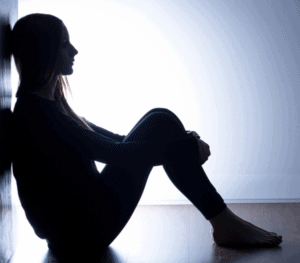 This week is loneliness awareness week and it’s never been more needed.

The Covid-19 crisis has highlighted the issue of people living alone with little direct support but loneliness is not just a lockdown problem. With grown-up children living far from parents, small communities splintering and urban living ever on the rise, it’s horribly possible to be living amongst hundreds of other people and yet never talk to a single one of them for days on end. And that’s terrible for the soul. 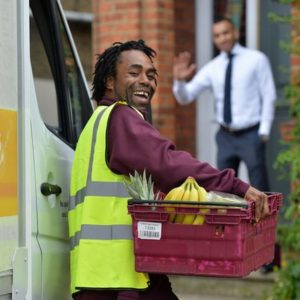 Two years ago, a brief conversation with a supermarket delivery driver cheered up what had been a dark and sad day for me and I realised the true value of even the simplest human contact. It had all taken around four minutes but it was exactly what I’d needed – a friendly face, a smile, and perhaps, above all, someone to listen to me. And it was out of that brief and heart-warming encounter that the character of Charlie was born and I began to write Four Minutes to Save a Life.

In the novel, supermarket delivery driver Charlie – a kind but damaged young man who’s nursing a secret or two – enjoys his new job because he doesn’t have to spend too long with people. But when he’s assigned the Hope Row street, he realises there are a lot of lonely people out there and for some, he’s their only interaction. His boss tells him he’s a driver not a social worker, but Charlie can’t abandon the Hope Row residents and he sets about trying to draw them out of their shells and back into the world. The question is, will his helping hand make everything worse?

The answer, I hope, is no – reaching out to people rarely makes things worse. Humans are social creatures and it’s not good for us to be alone too much, but more and more people are finding themselves isolated for days, if not weeks on end. Despite our supposedly ‘connected’ world, we are starved of the true connection of human contact. The Jo Cox Loneliness Commission, set up just before her tragic death in 2016, found that over 9 million adults suffered loneliness some or all of the time. 50% of disabled people were often lonely, as were 52% of parents of young children, 58% of migrants and refugees, and a staggering 80% of carers. Off the back of the pioneering work done in Jo’s memory, charities such as Mind, Mental Health UK and The Campaign to End Loneliness are warning about the severely debilitating effects of isolation on mental health and general wellbeing.

So what can we do about it? From what I’ve seen, tiny efforts are all that’s needed so here are five simple tips for a more connected life: 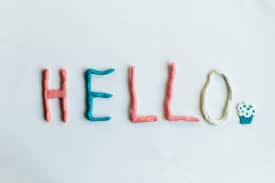 Say hello to someone every day

Now that we are all slowly creeping out of our houses again, why not make the effort to smile at someone and say ‘hello’. I’ve started trying to do this when I’m out on my daily exercise and, OK, sometimes people look at you like you’re weird but most of the time, after a brief moment of surprise, they’ll say hello back. And smile! 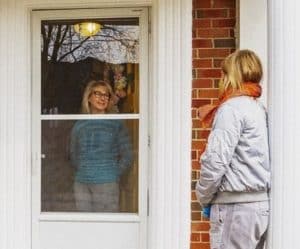 Again, this doesn’t need to be dramatic. I’m not suggesting we have to take someone into our home (even if we were allowed at the moment). It’s more about looking around us and thinking of others. So many support groups have sprung up during lockdown to help those who cannot get out, and I really hope that we can work to sustain at least some of that friendly spirit as people begin to fend for themselves again. We need more than just a loaf of bread or a pint of milk; we need a chat, a smile, a moment to remind ourselves that we’re in this thing called life together.

Reach out to friends 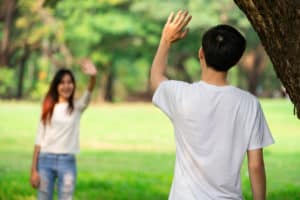 How many of us have a friend – or a number of friends – that we ‘really must get together with’? We use all the usual excuses of work and kids and the classic ‘I don’t know where time’s gone’. That’s all so true but there’s little more restorative than getting together with mates, even just for an hour or two, and now we’re allowed to meet outside again, it’s well worth the small organisational effort.

Look up from your phone

We’re all guilty of this. Left alone for even a moment, we delve into our pockets for that ultimate safety device – the phone. Whilst we’re tapping away, we can both look and feel as if we are busily communicating with the world, but are we? Is there not more value in looking out the window at the life around us, in admiring the scenery or chatting to a person nearby? This brilliant little film by Andy Parsons for The Campaign Against Loneliness shows him persuading people in a shopping centre to put away their devices and chat and so much laughter and quiet joy ensues. If we take time to be still and to connect occasionally, life can be that little bit richer.

Conversely, pick up your phone

Not to text, or to post filtered pics, or to scroll through tinder or youtube videos of cats, but to actually call someone. Ironically, we are spending more time than ever before on phones but are talking far less. And when we do it tends to be more for practicalities than chat. So why not find 10 free minutes, scroll through your contacts, then call someone you know doesn’t see many people and ask the simple question ‘how are you?’ It’s more rewarding than those cats, however, funny they are.

Making simple connections with other human beings is what it’s all about. I’ve always hated the word ‘strangers’ because it implies that people we don’t know are ‘strange’ which is, of course, nonsense. As Charlie says in Four Minutes to Save a Life, ‘Strangers are just friends you haven’t met yet.’ He’s paraphrasing a well-known saying attributed to Napoleon: ‘Strangers are just friends waiting to happen’. If the great general could see that, then surely we all can – though hopefully we are doing it less with the aim of world domination and more with 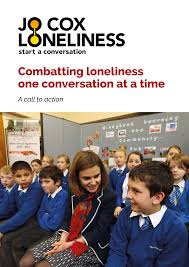 the far simpler aim of making our lives and those around us that little bit happier!

We all need to talk. It’s been well known throughout time that one of the greatest punishments for a man or woman is to put them into isolation. Humans are designed to live in communities in order to derive energy and comfort from one another, but these days traditional concepts of ‘community’ are breaking down with more and more people living alone and not even knowing their closest neighbours. It’s an issue we all need to address and it doesn’t have to be hard. Jo Cox’s commission was set up with the aim to ‘combat loneliness one conversation at a time’, so perhaps it’s time we got those conversations going… 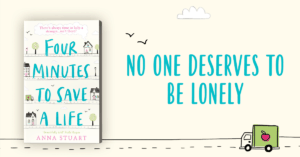 Buy Four Minutes to Save a Life for just 99p here now.