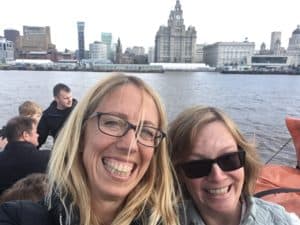 When I asked my trusty research assistant (better known as my mate, Brenda) if she’d be prepared to come on an arduous trip around Liverpool’s clubs and bars to research my new novel Bonnie and Stan, she didn’t even hesitate for a moment. Little did she know she’d end up singing Yellow Submarine at the top of her voice in the middle of the day – and sober – but it’s important to be thorough!!!

We started at the Mersey because – well, why wouldn’t you? There’s something very appealing about cities with big river frontages and Liverpool certainly has that. There’s been a huge amount of regeneration there over the last years and the once foul docklands are now beautifully restored and home to all sorts of shops and cafes. 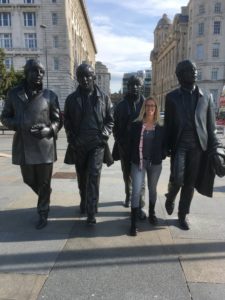 We, however, were on a musical mission that started with a stroll with some larger than life Beatles and then took us inevitably towards the ‘Ferry Cross the Mersey’. Sure enough, the ubiquitous Jerry and the Pacemakers song was obligingly played over the speakers as we set out on the water and we were blessed with a gloriously sunny day. 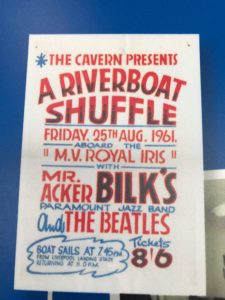 It was lovely to see Liverpool from the water but I also spent a lot of time excitedly pacing the inside of the boat as it was on this ferry that the Beatles, and many other bands, played in the then famous Riverboat shuffles, held on some glorious summer evenings throughout the sixties. In the novel Stan’s band, The Best Boys, get to play there and it is the highlight of their all-too-brief career.

‘The Royal Iris was done up in bunting and snatches of music were drifting out of the saloon windows as the bands warmed up. All the people on their everyday commute were, she was sure, looking enviously over and even the air was warm at last, as if winter was finally loosening its grip on Liverpool. It felt like a night full of possibility and, despite not having touched a drop of alcohol, Bonnie felt gloriously tipsy.’ 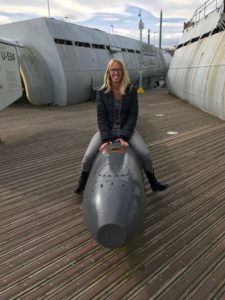 Although we were in Liverpool to research the swinging sixties, the all-round history geek in me couldn’t resist the U-boat experience, especially as it was included in the price of our ferry ticket and thank heavens we went – it was fascinating. On display was genuine German submarine, sunk right at the end of the war and rescued back to Liverpool to be carved into neat cross-sections so that you could look into the living quarters, the kitchens and the torpedo stores. The thing was vast from the outside but looked tiny within. I don’t know how anyone found – or finds – the courage to actually sink beneath the oceans in one of those things, especially in the war when the death rates for submariners were horrifyingly high, but they were fascinating to peer at from the safety of outside. 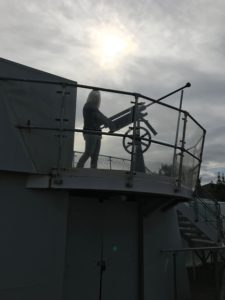 What’s more we found out that the U-boats in the Atlantic were crippling us in 1944 and that this huge threat was eventually wiped out by a small team operating out of Liverpool that consisted of a retired officer and a handful of 18 and 19 year old wrens who worked out a way to combat the subs and trained hundreds of navy personnel in the techniques. This was a critical part of Britain’s eventual victory and for a while I had Aunt Nancy working as one of those wrens but in the end there was just no room for that part of her story in the novel – though I know it for myself and I may yet write it one day.

We sailed up along the far bank to see the curving slopes of the Wirral where Bonnie and Stan have their current day house and to peer at where the Tower Pavillion was. The magnificent tower that once topped it was the highest structure in Britain when it opened in 1900 but was neglected in the first world war and had to be pulled down even before Bonnie and Stan’s time. The ballroom, however, was a huge venue for all the top Merseybeat bands.

‘There!’ Susie-Ann squealed, clutching Bonnie’s arm as they passed under the wrought-iron archway. ‘Look at that huge building glowing like the Palace of Versailles – that’s the Tower Pavilion.’ She spun round to the Best Boys to add, ‘And my gorgeous boyfriend is going to play there!’
‘Place of Ver-what?’ Sticks asked, crinkling up his pale nose, but Susie-Ann just kissed it.
‘Don’t matter- you’re going to rock it tonight, lad. And we’re going to rock with you.’

Back on the city side, we headed for the excellent Liverpool museum to learn all about the city’s history and, of course, about their most famous sons. That’s when we ended up doing karaoke but I’m pleased to say it was in a soundproof room so others were spared our less than tuneful attempt at the Beatles’ music! 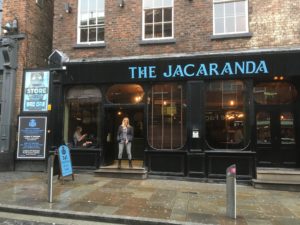 Next stop was the Jacaranda Bar. This is perhaps less well known than The Cavern but was a huge music venue in the Sixties and I was keen to visit as it is where Bonnie and Stan first meet in 1963. It’s been enlarged now from the very thin bar it was back then and is bigger on beer than the espresso coffee that was all the rage at the time but it is still an intimate venue. It had an original jukebox and we could peep down into the basement where Bonnie first saw The Best Boys play. To my delight, it didn’t look much changed!

‘The Jacaranda was a tiny little place with a chrome-trimmed bar running the length of the thin room, and people were crammed into every bit of space. In the far corner a jukebox held court, conquettishly flashing its lights and pouring out Elvis’ syrupy voice for a penny.’ 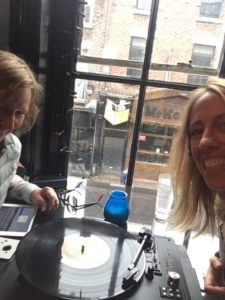 Perhaps best of all was when we went to the upstairs café where you can grab yourselves a booth with a proper retro turntable and play vinyl to your heart’s content. I have since returned there with my kids and was gratified to see the amazement on their faces as we slowly lowered the needle into the groove with not an iphone in sight!

Of course, I was still keen to go to The Cavern, setting of several key scenes in the novel, and whilst this is undoubtedly a massive tourist destination it’s run in a very genuine way. The club these days is actually a recreation, built a few doors down after the original collapsed from neglect, but it has been lovingly and accurately re-created and it was fantastic for me to stand beneath the three low brick arches and imagine it as Bonnie and Stan must have known it. According to many accounts I have read of it back in the sixties it wasn’t an especially pleasant place. 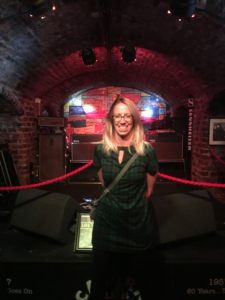 Reeking of rotting veg from the market that was above it, and with damp so bad it sometimes ran down the walls, it was a bit of a dive but as a result only the young and truly dedicated to the massive new Merseybeat scene went there and they loved it as their own.

‘It was the smell that hit Bonnie first – a potent cocktail of sweat, damp and something like rotting veg. She recoiled and glanced to Spike but his eyes were glowing with excitement as he tugged her towards the steep stone stairs that led down to the Cavern Club.’

We weren’t there on the right day for the full Beatles tribute act but we loved the local bands who played a mix of Merseybeat and their own music, recreating some of the intimacy of the club in the sixties – though thankfully, as at the Jacaranda, with very nice beer rather than the coke that was drunk then. We also got to hang out with Cilla Black (well, her statue) who features in the novel as the cloakroom attendant that she truly was. 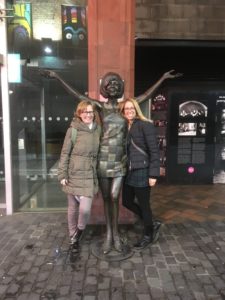 Oi! Who are you? And worra you doing in my cloakroom?’
Bonnie was jolted back to the present moment to see an auburn-haired girl glaring at her. She glared back.
‘I’m Bonnie and I’m helping Lee.’
‘Sweet on him, are you?’
‘No!’ Bonnie ducked round the bristling girl. ‘I’m with Spike actually.’
She gestured to where Spike was now signing beer mats for his acolytes.
‘Looks like it.’
‘Well he can hardly dance with me when I’m in here, can he?’ Bonnie shot back.
‘In here doing your job, Cilla,’ Lee said, coming over. ‘Don’t be so catty, lass. You know Wooler won’t let you sing if you don’t work proper.’
The girl – Cilla – sighed but then nodded and stuck out a slim hand to Bonnie.
‘Fair play. I can be a right cow. Ta, Bonnie.’ 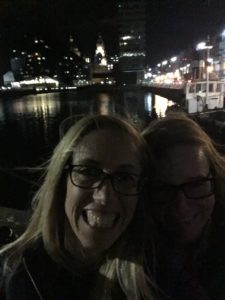 Finally music-ed (and beer-ed) out we headed home. We’d booked what seemed like an excellent AirBnB in the middle of the city and indeed it was an excellent room save for the fact that it was on the ground floor of a building of which all other floors were students residences – and we’d picked fresher’s week to make our visit!! Safe to say we didn’t get much sleep but we could hardly blame the students for wanting to make the most of all that Liverpool has to offer and perhaps it was our own fault for being dull and old and foolish enough to actually go to bed in such a vibrant city.

The next morning we had time to head under the Mersey and out onto the Wirall to take in Bonnie and Stan’s present-day homeland properly – and very lovely it was too. We were looking for a place for Stan to take his family for Scandinavian-style Midsummer with Bonnie’s Aunt Nancy and her Swedish wife and we found it at Red Rocks. It wasn’t exactly Midsummer weather but it was beautiful all the same and, after all, it’s my job to imagine it on a gloriously warm night! 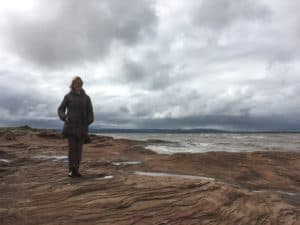 ‘If I’m not very much mistaken, folks, there is one Swedish tradition we’ve not done yet.’
She turned her eyes to the sea and now Astrid’s eyes glowed too.
‘What?’ Stan asked, uneasily.
‘Nakebad!’ Nancy cried. ‘Skinny dipping.’
‘Oh no,’ Stan said. ‘No way.’
‘Yes way. Come on. The sea’s right there, Stanley. And look at the moon shining so beautifully on it, beckoning us in. Live a little!’ 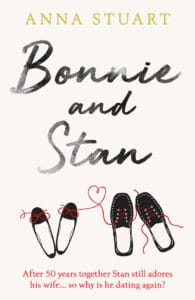 Skinny-dipping venue found, our job was done and we had to turn for home. It had been a wonderful trip. Bonnie and Stan is not a book about Liverpool and the Wirall but it is firmly rooted in the area and it was a joy to tread in my characters’ steps, both in the sixties and the modern day, and to be sure that I told it accurately. I really hope readers can get a sense of it from the novel too.

It’s out now in ebook and will be coming to the shelves in paperback on May 31st. Buy it here!